Images That Could've Been - The Montreal Umbrella 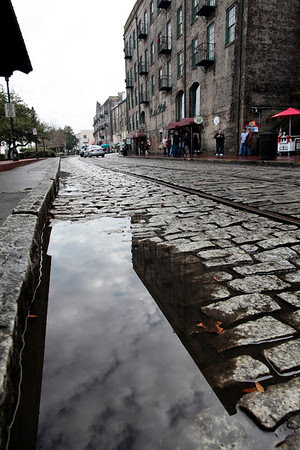 I was perusing some old shots of Montreal which were, in general, not horrible; probably some where between ... and ....  But this one caught my attention because not because of what it is but because of what it could've been - missed possibilities.

So I thought maybe I would just write up a quick self-critique and then maybe invite you guys to comment, too.  I welcome your thoughts.

I'll start with the obvious stuff.

The Sky
A yucky, uninteresting white blob.  I had thought I would use the curb as a line running out to infinity but that left a big open, overcast sky.  This is the first reason I should have changed my angle and put more of the building in view.

The Umbrella
That red umbrella could've been teh perfect focal point for the shot.  The overcast, dreary color palette could've had this pop of color.  I could've tried to get it reflected in the puddle.  gahh.  Lazy.   I was focused on the perspective lines formed by the tracks and the curb but I got the horizon crooked.  Learn .... that's the key.
(c) Glen Goffin at 5:06 PM